Showing posts from December, 2013
Show all

What to do with Leftover Turkey…Make a Pie! 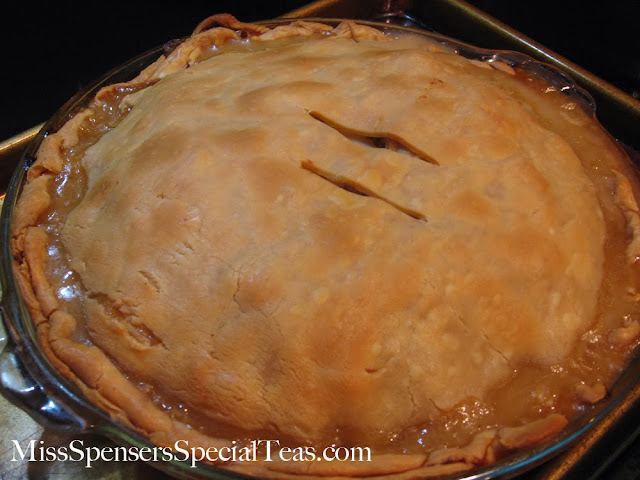 We hope you all have had a wonderful Christmas holiday with your family. We have certainly enjoyed some down time. However, one thing that never changes around here in terms of work is hungry boys!! Perhaps you can relate? Here’s an easy recipe that does two things – uses up left over turkey and fills hungry boys’ bellies!  ~ Donna 2.5 – 3 C diced turkey * Left over Gravy, about 1 C or 1 Can of Cream of Chicken Soup  1 TBSP of Dried Onions  ¾ tsp. Lawry’s Seasoning  1 large can of Chunky Veg-All Vegetables, drained  1 regular can of corn, drained  1 Box of Pillsbury Pie Crust  Place the thawed pie crust in a pie dish. Place in a large mixing bowl: diced turkey, gravy (or, if using the cream of chicken – use the can of soup and add 1/4th of a can of milk), dried onions, seasoning and drained vegetables. Mix together well. Pour the turkey/vegetable mixture into the crust. I usually put the pie dish on a baking sheet before placing in the oven to catch drippings.
1 comment
Read more 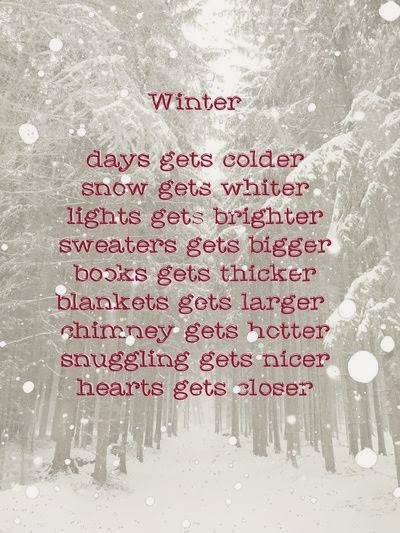 I typically don't like winter, but isn't this a sweet little quote!  Hope you all are staying warm and cozy! Are you all ready for Christmas? I did some Christmas baking the other day, but we got into my gingerbread men and now they are all gone! I'll have to make some more!
4 comments
Read more

Here's a fun article from BuzzFeed Books written by Ellie Hall called 20 Magical Children's Christmas Books to Read Aloud. Some of these books I remember from when I was little and others are new to me. I'm excited to look them up! I love Christmas Books! Don't you!? 20 Magical Children's Christmas Books to Read Aloud by Ellie Hall, BuzzFeed   baumanrarebooks.com 1. How the Grinch Stole Christmas by Dr. Seuss  The story: The Grinch, a grouchy, selfish creature who lives in a cave above the town of Whoville, grows annoyed at the Whos’ joyful Christmas celebrations and decides to stop Christmas from coming by disguising himself as Santa Claus and stealing all their presents and decorations on Christmas Eve. Why you should read it : Dr. Seuss’ critique of the commercialization of Christmas is just as relevant now as it was when the book was published in 1957. The small-hearted Grinch’s transformation reminds readers young and old that Christmas is
3 comments
Read more 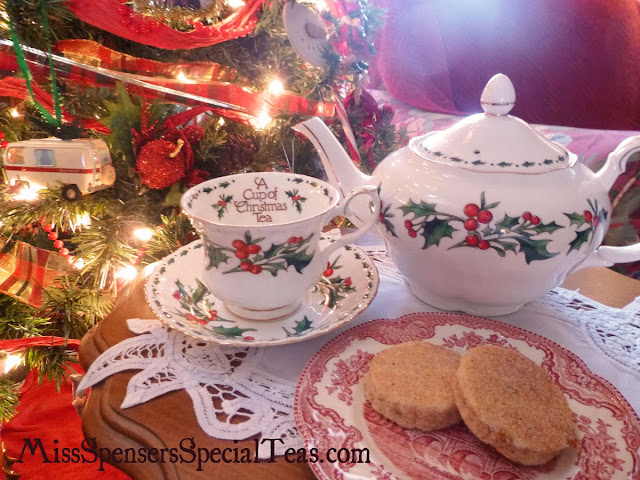 Traditional Welsh Cake Cookies 3 ½  C Flour ½ tsp. Baking Powder ¼ tsp. Salt Dash of Nutmeg & Allspice 1 C Sugar ½ pound of Fat (Lard & Butter are best)* 1 Egg 3-4 TBSP Milk ½ C Currants** Measure flour, baking powder, salt and spcies into a bowl.  Cut in the fat with pastry tool.  Add 1 large egg, slightly beaten and ½ C Currants.  Add milk, 1 Tablespoon at a time, blend together to form soft dough that is not sticky. Roll the dough to ¼ inch thick on a lightly floured board.  Cut into rounds with a floured fluted cutter about 2 inches in diameter. Cook on a lightly greased electric griddle on medium heat (275 degrees) until they are golden brown, about 5 minutes per side.  Roll in cinnamon sugar.  Makes approximately 24 – 2 inch cookies.  They keep very well in a tin. *We used half Shortening and half Butter **We like Golden Raisins, so that’s what we use instead of Currants. Enjoy! These are one of
6 comments
Read more 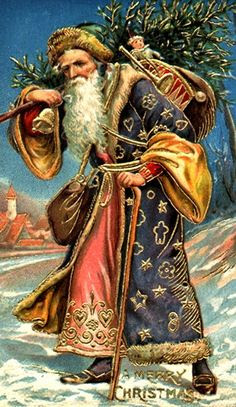 Happy St. Nick’s Day! The tale of St. Nick is an old one, dating back to the third century when a wealthy couple had a child named Nicholas. His parents raised him to love the Lord, but sadly they died of an epidemic while Nicholas was a young boy. When Nicholas grew up, he became a bishop. He was very generous and gave all of his inheritance away. The people loved him for his kindness. He was especially caring and kind to children. During the time Bishop Nicholas was alive, the Roman Emperor persecuted Christians. Bishop Nicholas was thrown into prison along with many other bishops, priests, and deacons. In fact, the prisons were so full of religious people, that there wasn’t room for real criminals like murderers, thieves and robbers. Yet, Bishop Nicholas remained steadfast in his faith and was eventually released. He continued his good work until the day he died – December 6 th . It is on the anniversary of his death that we celebrate, St. Nicholas Day!
1 comment
Read more 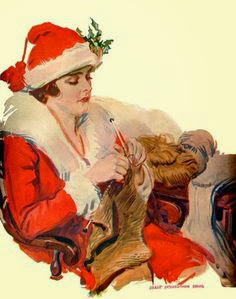 At this time of year, I find myself getting creative! I love making homemade gifts! How about you? I love to knit, so I'm usually making mittens, hats, and scarves - Norwegian Style are my favorite! Do you have anything special you are making for your family and friends?  You don't have to know how to knit or sew to make handmade gifts! Some can be as easy as baked good or hot chocolate mixes!  Here are some ideas to get your brain ticking!  From  Bloom Designs Online - Chocolate Sundaes Mixes From  The Heartfelt Home - Peppermint Bark DIY Personalized Mugs ! All you need is Sharpies and a Mug! From  Alice & Lois Blog  - Homemade Heater These heaters are one of our family's personal favorites!   DROPS Patterns  - Norwegian Mittens I'd love to hear what you are all making this Christmas Season! Please comment below
4 comments
Read more
More posts